We had an exciting SHOT Show this year. SHOT is always a great way for us to kick off a new year because of the encouragement we receive from past and potential customers.

In this post, I will hit the high points of our four days in Las Vegas for the 2019 SHOT Show. First, I will walk you through our booth and the fun, new stuff we had going on this year. Next, I will show you the Facebook LIVE video I did with Gun Talk. Finally, I will show pics of other exhibitors at SHOT using our products for their displays. 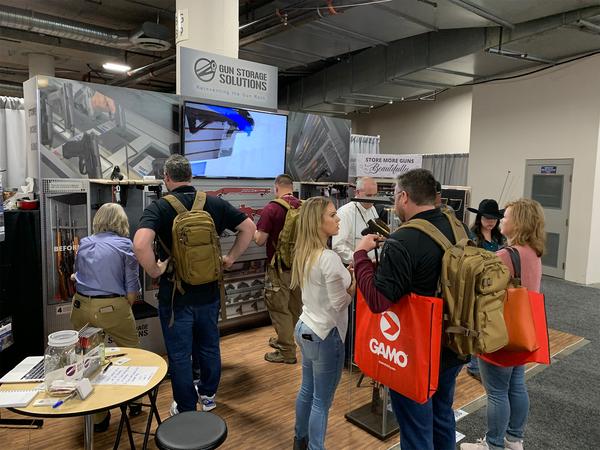 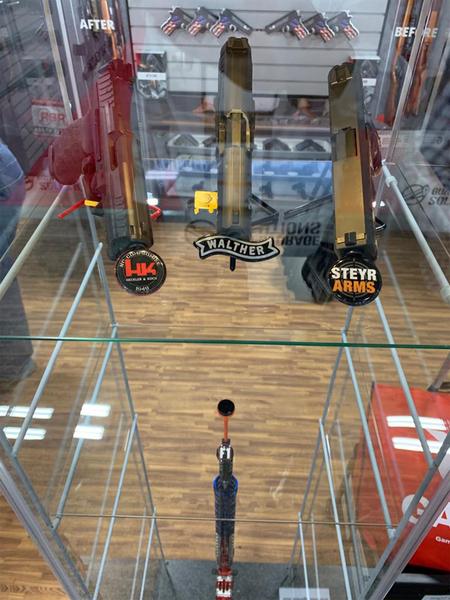 Here are a few samples of the custom branded Kikstands we have made for gun manufacturers. 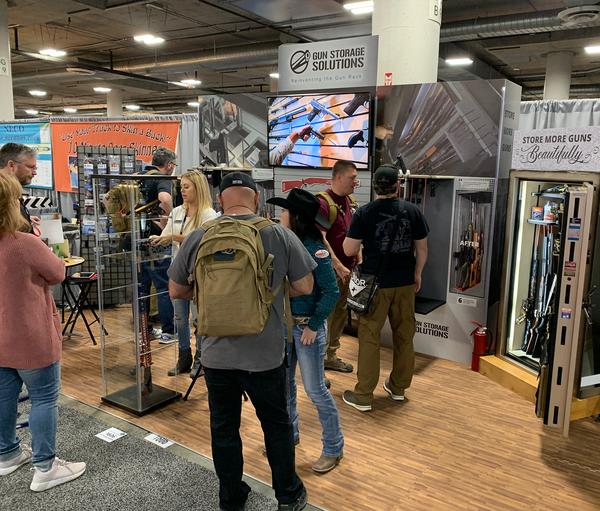 This year we changed up the layout of the booth so that we could demo our Gun Safe Accessories in three different areas. We had two mock gun safes and one real gun safe - The World's Most Beautiful Gun Safe. I'll tell you about that in a sec.

The two mock gun safes give a better inside look at how our Rifle Rod gun rack system can save space inside the safe. Being able to see a clear side view of the stored guns without walls is so important. It really helps people see where we are finding the extra space for more guns.

The magic in our products is finding the extra space that lies behind each leaning gun. If a gun is leaning into a notched gun rack, there is space wasted. Just straighten that gun up and - low and behold - there is room for another gun to fit comfortably behind it. Poof! Magic!

Our third demonstration area was in the Liberty National Security Magnum gun safe. This beautiful safe had some awesome guns on display. Each gun filed in neat rows caught the eyes of passerby's and made them stop and stare. Having an actual gun safe in the booth helps people imagine what their gun safe could look like using our Gun Safe Accessories.

The Most Beautiful Gun Safe

The concept behind The World's Most Beautiful Gun Safe was to show people that their gun safe can be beautiful. Yes, even your over-crowded, messy, too-small gun safe can be transformed by Rifle Rods, Handgun Hangers and Mag Minders.

We called on some friends in the industry to let us borrow a gun safe, guns and ammo. What an awesome collection we ended up with, thanks to Liberty Safe, Walther, EMF, F-1 Firearms, Double Tap Ammunition, Lightning Ammo, ArmaLaser, and others.

We love our guns, right? Give your beloved firearms a space they deserve - a safe haven of rest until they are called to action. Give your gun safe a new, organized space that holds more guns than ever and make it B-E-A-utiful!

During the SHOT Show we held an exciting giveaway! First thing Tuesday morning we took a fun video of our World's Most Beautiful Gun Safe and posted it on Facebook. To enter our giveaway, we asked our visitors to drop their name in a bucket AND like, share and comment on our gun safe video.

Each day we gave away $200 in ammo from Double Tap Ammunition, hats and T's from F-1 Firearms, and a bundle of our Rifle Rods and Handgun Hangers. We also gave away jugs of Lightning Ammo and a pistol laser from ArmaLaser. 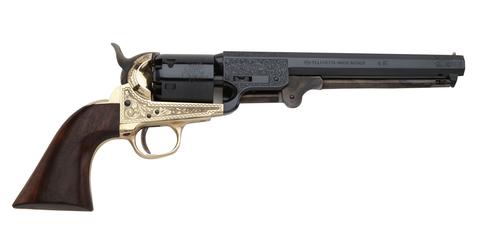 For the grande finale of the giveaway we offered two free guns! EMF donated a 1851 Hartford Navy Brass .36 71/2" pistol. 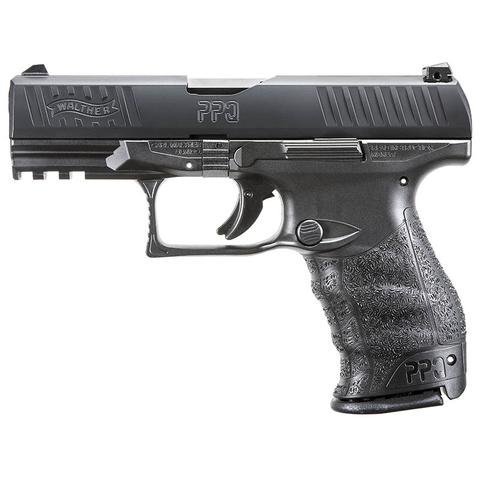 Walther donated a PPQ M2 handgun. On the last day we put all the names back in the bucket from the 4 days of the show to draw for the winners of the guns.

All and all the giveaway was a fun activity for our booth and we enjoyed hosting it. A huge thanks to all of our sponsors for making the giveaway so successful!

KJ and Katie took an eagle eye view of our product offerings and the excitement happening at our booth this year centering around The World's Most Beautiful Gun Safe.

This Facebook LIVE was really fun because we could interact with people watching from their facebook accounts and commenting on the video in real time. One commenter asked if we had a gun rack for the shower - HA! The answer was "no", but maybe next year! Thanks for the idea!

Since we have a booth at the SHOT Show, we don't get a whole lot of time to roam the floors, but we love venturing out to play "I spy..." with our products. Many of our customers use our Gun Display Products to present their products at trade shows. In fact, we usually bring a bunch of extra Kikstands and Gun Cradles just for the exhibitors that realize they need more at the last minute during set-up.

Here are a few booths that displayed their firearms using our products: 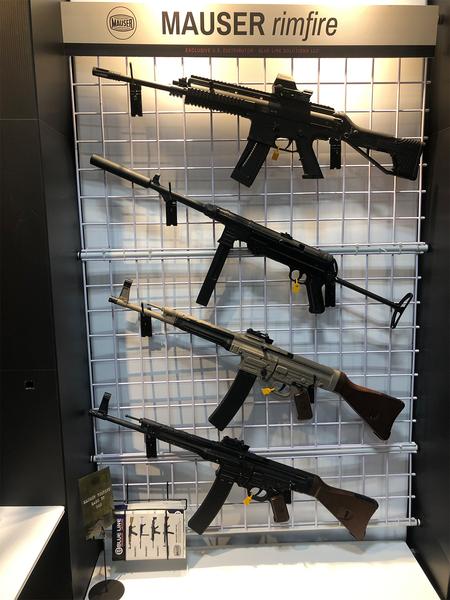 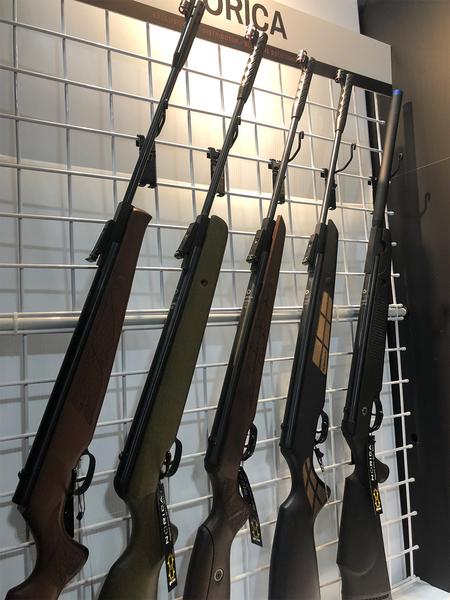 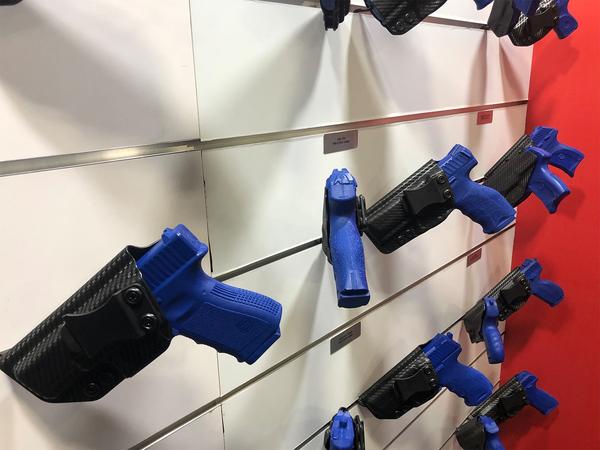 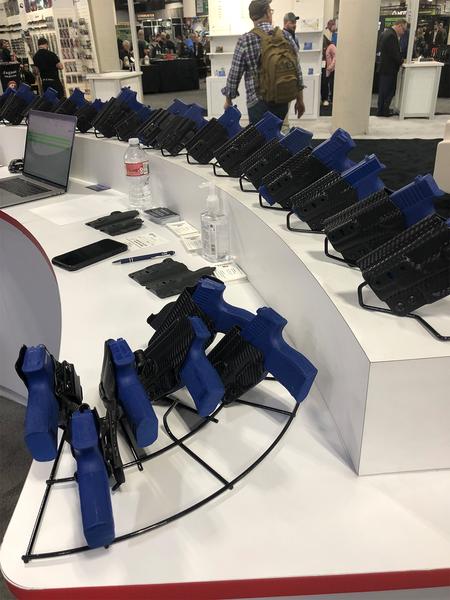 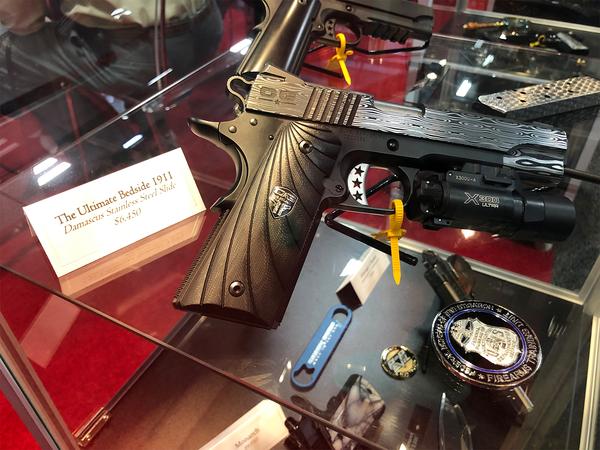 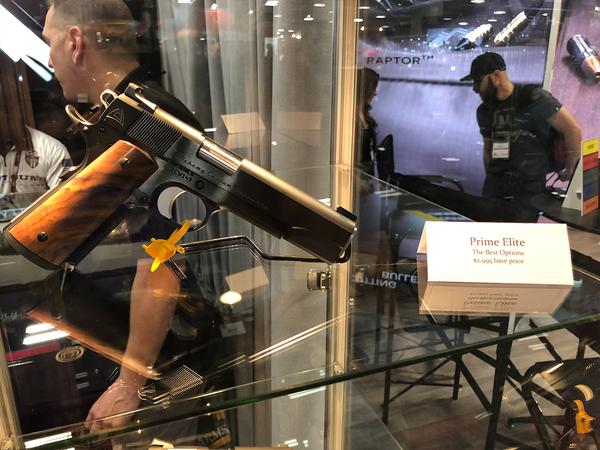 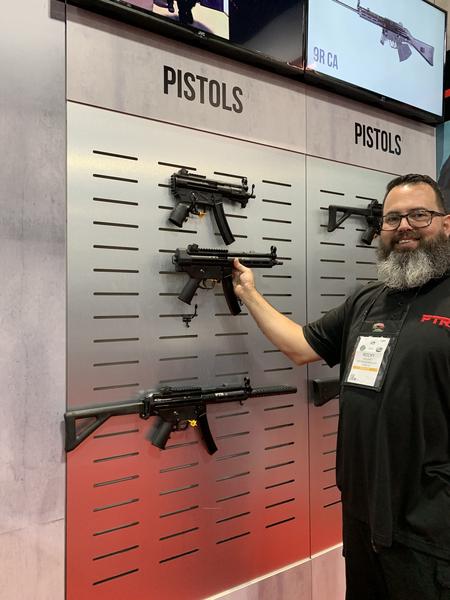 2019 SHOT Show was a great year and we look forward to next year!

Here's a behind the scenes look at us celebrating with a meat and cheese tray during move out. We are fancy. Cheers! 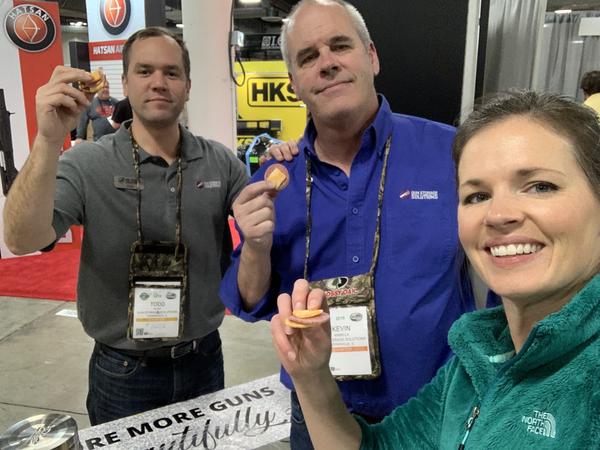